My Lack of Will-Power

I do not have the will-power to give people the cold shoulder.  It's tremendously effective, if being insulting, spiteful, and boorish is what you're aiming for, but I just don't have the will-power to pull it off myself.  The best individual I've ever seen at this stunt was my ex-mother-in-law.  Honest to gawds, she was so good at pretending I wasn't there, I almost wondered myself a few times (maybe I'm not really sitting here in the same room with this woman, maybe I'm hallucinating).

I tried it, this cold-shoulder tactic, like once when I had to go to my ex-husband's aunt's funeral, but it is *So Hard* for me to do this.  There I was, in the middle of enemy territory, surrounded by oodles of people who either despised me or didn't know me, and I had to keep saying to myself, "Don't look!...Don't do it...no, no, no. Look at that spot on the wall, keep your eyes on the bouquet, look at your plate-- head down...Don't look over there!"  It was awful.  I'm really lousy at this type of thing.  I think I just basically don't understand it.

I'm just too damn curious to ignore anyone.  I want to look at them; I want to ask questions; I want to know how life's been treating them, what they're up to, how they're doing.  I'm amazed at the way some, ummm, what should we call them?..."Ignorers"?...Can suddenly, completely, without warning, just cut someone out of their lives, never to hear from them ever anymore.  Not me, uh-huh.  By gawds, if I know you, I'll be thinking about you until the cows come home. 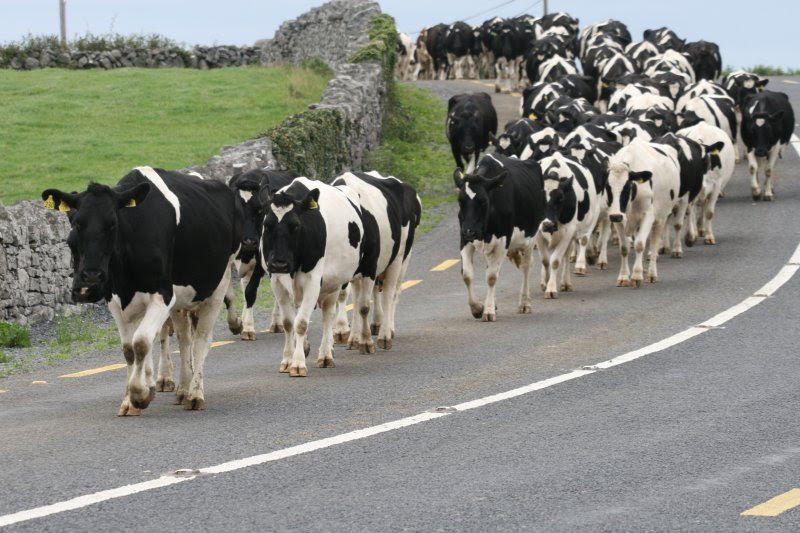 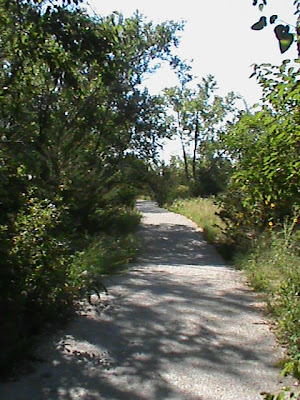 This is one of the walking trails at Fremont Lakes-- the morning I took this, it was just Joe and me, the hot sun, Sophie (the dog), and my camera.  Joe couldn't walk the trail (broken foot), but was sitting on the dock fishing-- heavy metal music blaring away.  Even though it was still pretty early morning, the temperature was in the 90s, humidity in the 80s, and the only thing keeping me from a hard sweat was the shade that you see on the trail.  After I rounded a bend, the shade was gone, and I said to myself, forget this crap (truth is, I don't like to sweat, and I don't appreciate the hot sun on my little white girl skin). 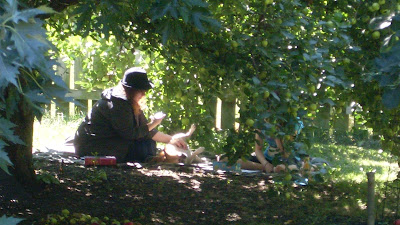 Our apple trees are loaded, and I mean *Loaded*.  I've never seen this many apples on the trees before.  The limbs are hanging to the ground, moaning with the weight.  The girls love to take a blanket out and spread it beneath the canopy.  They feel like they're all cloistered in the middle of a woods, hidden in the leaves and the cool shady spots; and the dog and the cats come to them there, slinking onto the blanket, gathering together. 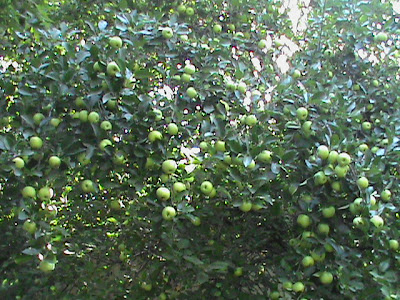 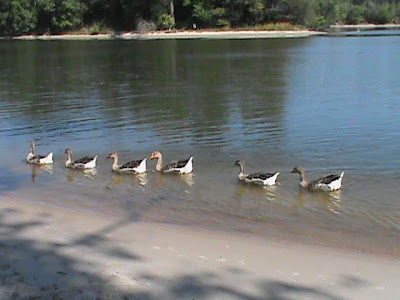 As I look at this picture, I'm thinking, "It's all about getting all your ducks in a row."...that's it.  This isn't what I was thinking about the day I shot this photo; I was simply concentrating on getting the lineup in focus, but now, this makes sense.  As a pagan, an occultist, a spiritual feminist, I'm always looking for divine messages in the natural mundane things of the world.  That's what this is about, for Joe and me, with issues and responsibilities coming up-- "Make sure you've got all your ducks in a row." 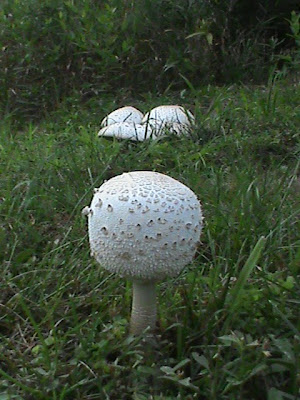 The message here?...Even out of something rotten, good things will grow.

And that's the truth.

Mundanely speaking, I know people who go mushroom hunting, but I'm not among them.  I couldn't identify a poisonous mushroom from an edible mushroom if my life depended on it...and yes, that pun was intended.  But I think they're pretty. 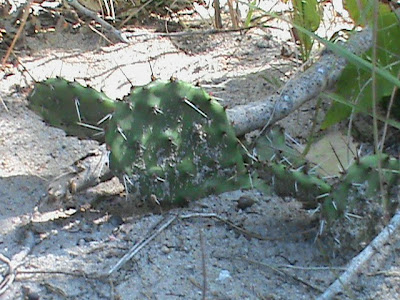 There's cactus scattered all over the grassy areas along the walking trails at the lakes.  Our neighbor was surprised by this, stating that he thought cactus only grows like this out in the Sandhills.  And the moral of this story?...with enough stubborness, strength, and determination, you can plant yourself anywhere and thrive. 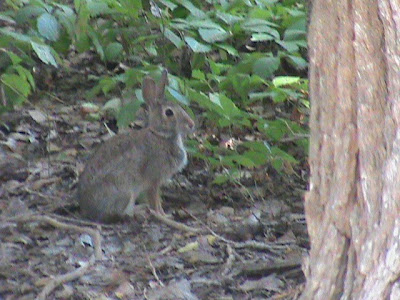 Thumper, oh ya...silly thing is so use to people that I was fairly close to it, and it could've cared less.  I see so many dogs out at the lakes with their owners, I'm surprised this rabbit wasn't a little more cautious than it was.  Lessons? Ummm-- finding a balance between predator and prey; a shaky truce; learning to trust after being taken for a ride; throwing caution to the wind...but the most important lesson-- be still and listen. 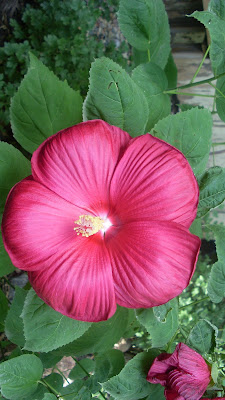 Hibiscus, blossoming in one of our flower beds this year.  Beautiful, isn't it.  I save the dried blossoms to use in mojo bags, oils, spell crafting, and the like-- for love and passion.  Did you know that in some parts of the Orient it's illegal to serve women hibiscus tea because it's believed to be a powerful aphrodisiac.  I have yet to personally test this theory.  I think next year I'm going to transplant the hibiscus to the flower bed in the front yard-- more sun.

This is what's been blooming at our house... 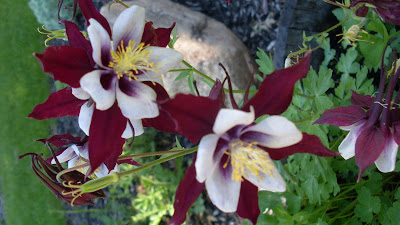 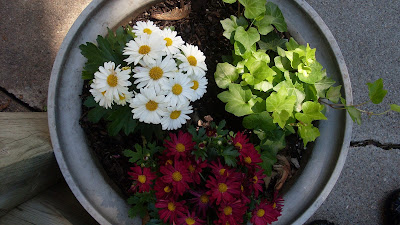 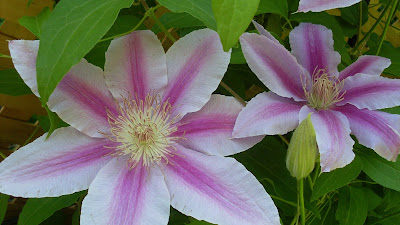 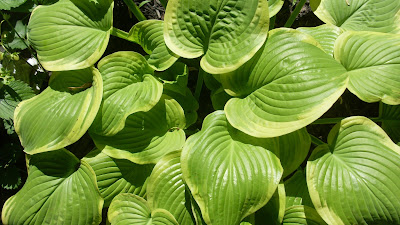 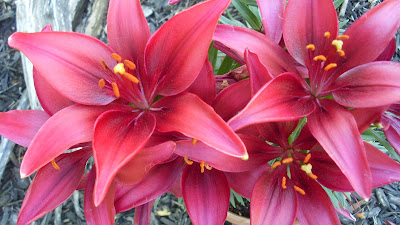 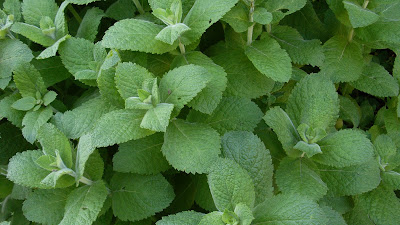 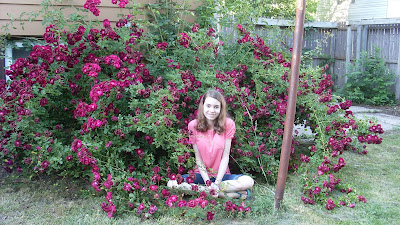 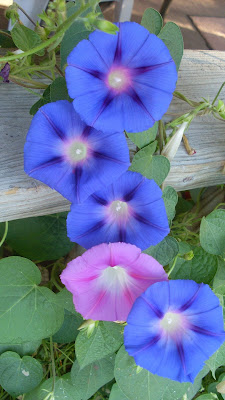 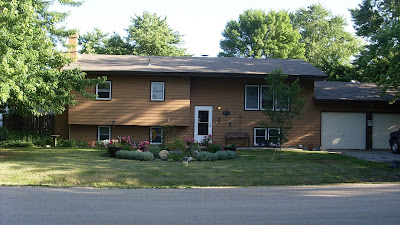 (A photo taken the beginning of the summer season)


Posted by Amythyst Raine-Hatayama at 10:29 AM No comments: