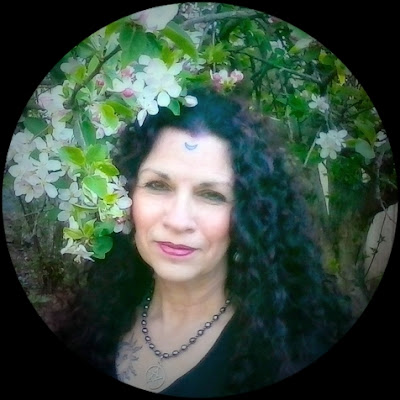 Posted by Amythyst Raine at 4:35 PM No comments:


If you know your Moon or Rising signs, there may be more than one of these videos that will resonate with you, and actually, some months your Moon and Rising signs may make a stronger connection than your Sun sign. In this description, you’ll find links to free calculators that will help you find your Moon & Rising signs. If you would like a PERSONAL reading with me, follow the link in this description box to my tarot website.

Posted by Amythyst Raine at 3:36 PM No comments: 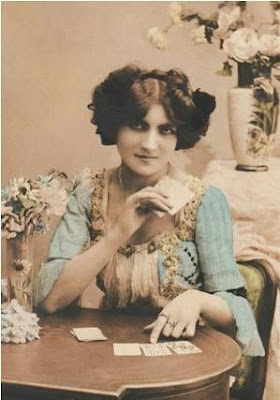 ANNOUNCMENT ~ I will be giving Personal Tarot Readings MONDAYS in Fremont NE, 5:30-8:00pm. These special readings will run $25.00 for a 20 minute reading. These readings are BY APPOINTMENT ONLY and PAID IN ADVANCE.  If you want a reading with me, email me at witch_of_endore@yahoo.com and type LOCAL READING in the subject line…or PRIVATE MESSAGE me at FB: https://www.facebook.com/amythystraine

This is a spectacular opportunity for me to offer this service on a wide scale local platform at a comfortable and private location, and it’s a bargain for a personal face to face reading.  I’m not sure how long I will be doing these very special “Monday Readings”, so take advantage of it, and bring a friend!
Posted by Amythyst Raine at 5:49 PM No comments:

http://tarotreadingswithamythystraine.blogspot.com
(Don’t miss the “outtakes” at the end of this video.  This is going to be a pretty regular feature on my videos from now on.)  During this video, I talk about what an audio reading is, about how far out my bookings run, about ordering from my site, about tarot readings  (and tarot clients) in general, and I actually produce an audio reading while we have the camera up and rolling.  Also, my loyal companions, Jackson and Charlie, are close by.
AUDIO Readings ~
http://tarotreadingswithamythystraine.blogspot.com/p/audio-readings.html
EMAIL Readings ~
http://tarotreadingswithamythystraine.blogspot.com/p/email-readings.html
Subscribe to my YouTube Channel ~
http://www.youtube.com/Amythyst1957

Hello, Peoples!
I know, this is another post that is not a mundane topic at this supposed-to-be mundane blog; but I just have such an awful time trying to separate the mundane ordinary me from the witchy tarot reading me.
Also, I 'm really up against a wall here.  I'm running out of mundane topics, my poor post-menopausal brain is going dry.  I've run the gamut of top 10 facts you didn't know about me, to all five mothers-in-law.  I need to know what YOU want to know.  If you have any ideas for interesting blog posts, mundane things from my mundane life that you'd like to read about, or a particular question you'd like me to answer...Let Me Know!!
Email me with your suggestions at ~
witch_of_endore@yahoo.com
(Type BLOG SUGGESTIONS in the subject line)
Posted by Amythyst Raine at 7:05 AM No comments:

I Will Be HERE On This Date!

I'll be giving TAROT READINGS at Next Millennium ~ 3141 N. 93rd St, in Omaha Nebraska, Friday April 29th, 3-7pm (and we CLOSE at 7pm, so get here early enough to finish a reading by closing time). These readings run $20 for a 15 minute personal reading with me. Do you have questions about Love & Relationships; Finances; Employment; the Future; or something unique? Let's see what's in the cards for you. ~

Visit the largest and most popular new-age shop in the American Mid-west, and shop till you drop: http://www.magicalomaha.com 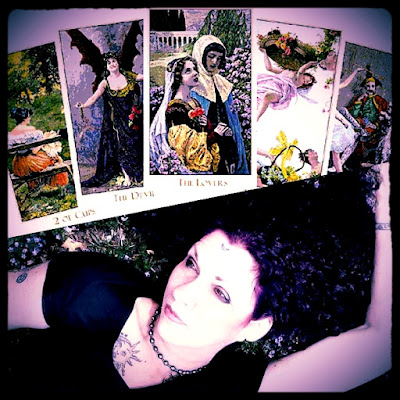 Posted by Amythyst Raine at 5:46 PM No comments:

A Surprising Transformation, courtesy of My Kidz

I have (HAD) the ugliest bathroom in the world.  It was so ugly that when a production company that does "house makeovers" for a reality show was looking for an UGLY BATHROOM to transform, I almost sent in my application, almost.  It was so ugly, and such a lost cause, that I gave up and turned it over as a habitat for two of our mangey-no-one-would-want-them cats, who trashed it even further.

Last Sunday my daughter & son-in-law came to stay overnight.  Little did I know that there was a conspiracy afoot.  I left Monday morning at 8am for work.  I had no idea that robust activity took off the minute I left the house.  When I got home that afternoon, it was evident that something very big was afoot...buckets, cleaning Stuff, mops, paint pans, rollers and brushes were lined along the upstairs hallway.  The shower curtain rod and outdated cloth shower curtain were laying in a dejected pile on the living room floor.  Daughters were giggling, laughing, coming and going with mysterious shopping bags.  No doubt about it, they were up to something (Mum says with a smile).

This house was built in 1964, and I do believe that the floor and wall tiles in this bathroom are the original tiles installed when the house was built.  They're such an odd color, and I've never been able to come up with a color scheme or theme that didn't clash with them, and I couldn't and can't afford to replace them.  I think my kids found the answer, the colors, the tone, and the ambience to make this space work.  They made it beautiful, clean, calming, and relaxing.

It was another three hours or so before they finished, and they wouldn't let me peek until they were all done, and it was time for the Great Reveal.

The following photos are the final product (I've got some Pretty-Cool-Kids, huh.): 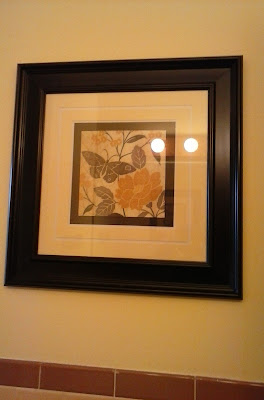 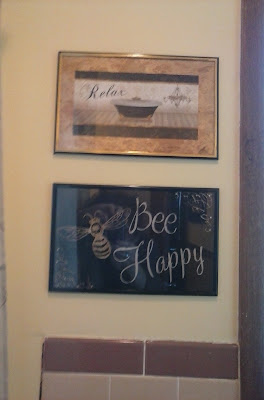 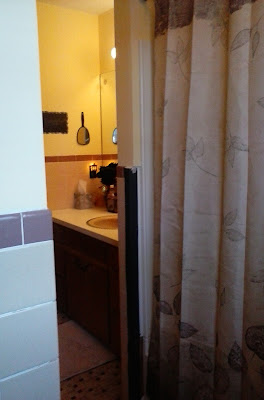 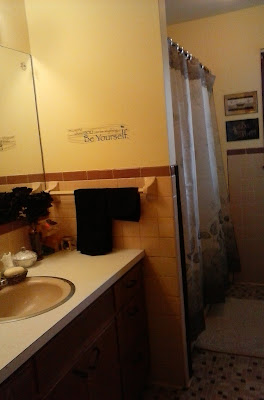 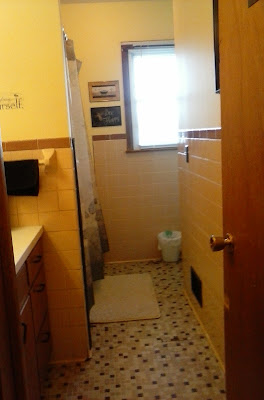 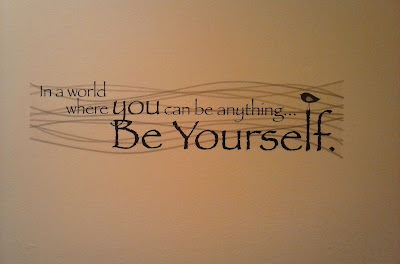 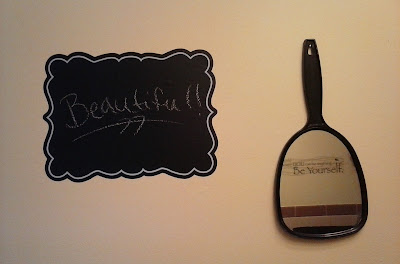 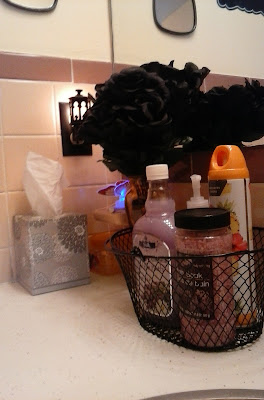 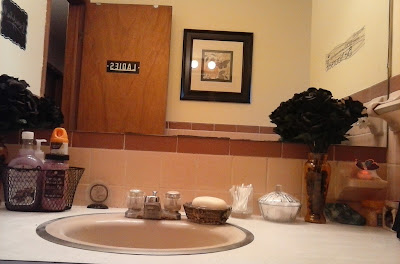 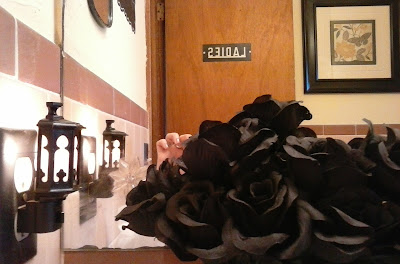 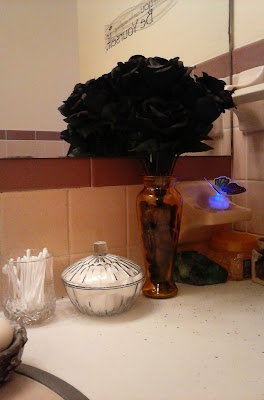 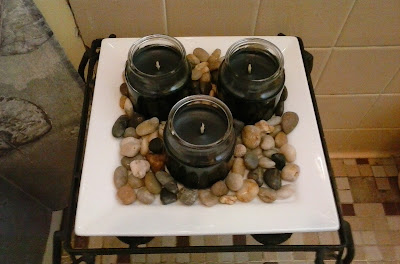 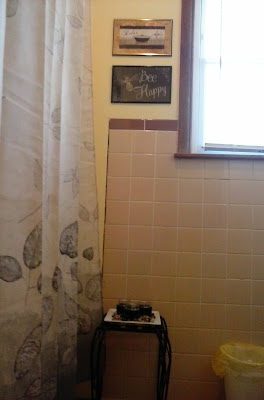 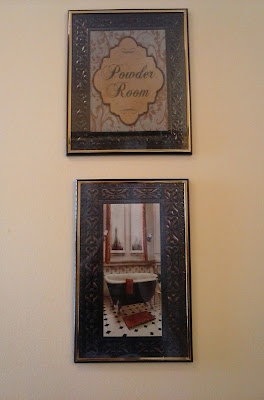 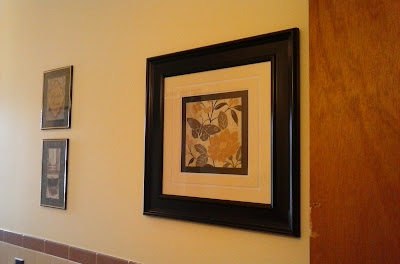 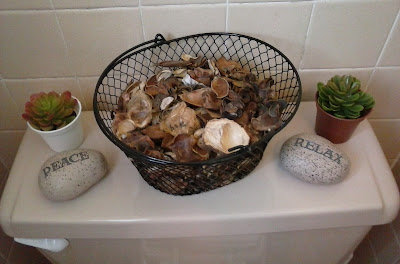 Posted by Amythyst Raine at 9:11 AM 2 comments:

Our mid-month updates for April are finished and out!  These mid-month updates are “mini-readings”, a two card draw, just to keep a check on which way our energy is going for the month.  Are we headed for something new?  Has the energy of the monthly reading changed course?  Are we in for some surprises?  Disappointments?  Victories?

Be sure to SUBSCRIBE to my Youtube Channel, Like & Share my videos– this is greatly appreciated, and it will my help my Youtube Channel and audience to GROW!   I have a new mini-co-host sitting in during the introduction to this month’s updates, you’ll LOVE him!

Posted by Amythyst Raine-Hatayama at 7:54 AM No comments:

The Witch's Corner ~ Let Me Be Your Tour Guide (video!)

The Witch’s Corner is my website.  Let me show you around, find out what’s there ~ pages of Free Spells; magickal correspondences; information on the Goddess, rituals, Pagan holidays, herbs, the Elements, and much more; discover the wonders of Dreams; Ghost Busting and paranormal experiences…etc.  My website is huge, and I know that there’s a lot to take in.

I so often receive emails from people saying “Do you have any spells?”; “Can you give me information for…”; and so on.  I have so much information out there for the taking, both at my website and my blog Magickal Connections– which will be another tour, but either people aren’t taking the time to look, or they’re overwhelmed by the sites.  That’s why I decided to do this video.

The Witch’s Corner is a very magickal corner of the internet…Enjoy!   Blessings, Amythyst

Posted by Amythyst Raine at 4:42 AM No comments:

Email ThisBlogThis!Share to TwitterShare to FacebookShare to Pinterest
Labels: finding your way around, let's find..., lot's of magickal stuff, The Witch's Corner my website

This past weekend I spent an entire three days filming, editing, and uploading April’s astrological horoscope readings for the Sun signs (Moon signs, Rising signs).  This month I stuck with my very old, very battered Rider/Waite deck, and I chose only 4 cards for each sign.  These videos are getting so difficult to load at Youtube, that I’ve cut down the time per video; this is one reason you don’t see me shuffle and choose the cards for any of the signs, it adds HOURS to the upload time at Youtube.

The readings were interesting, as usual, and I noticed a recurring theme throughout many of these videos for several signs, and that was The Moon.  Whether the implications are going with the positive face of this card ~ the goddess, matriarchal divinity, feminine mysteries, magic, as well as esoteric power and knowledge; OR the more traditional meaning behind The Moon ~ deception; it’s hard to say.  Watch the videos and come to your own conclusion.

Be sure to SUBSCRIBE to my Youtube Channel, and I would greatly appreciate it if you would LIKE & SHARE these videos.  I’m going to be creating these monthly zodiac readings through August 2016, at which time I will re-evaluate whether there is enough interest in these videos, and enough viewers,  to warrant all the work  it takes to produce them.

If you want me to continue Monthly Zodiac Tarot Readings, let me know!

If you know your Moon or Rising signs, there may be more than one of these videos that will resonate with you, and actually, some months your Moon and Rising signs may make a stronger connection than your Sun sign. In this description, you’ll find links to free calculators that will help you find your Moon & Rising signs. If you would like a PERSONAL reading with me, follow the link in this description box to my tarot website.

Posted by Amythyst Raine at 4:09 PM No comments: