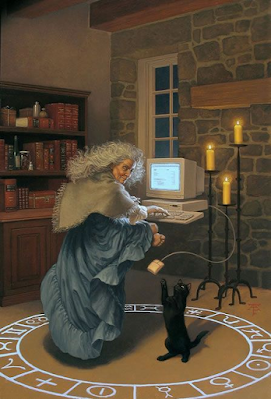 I receive a considerable number of questions from people, and I’ve answered a handful of them here. This just seemed like an easier solution rather than trying to answer individual emails, as more than one person often asks the same question. It just seemed logical to gather the answers all in one place. Remember that these are my opinions, this is about my path... and you asked.
Yes, there is a difference, and still, most people tend to lump these categories together indiscriminately.

“Pagan” is a broad term that covers a variety of beliefs and practices. It’s an umbrella term that includes witches; Wiccans- every tradition, clan, or solitary path you can think of; Druids; and a garden variety of spiritual practices that stray from the mainstream religions, primarily Christianity.

“Witch” implies someone who is knowledgeable in the Old Ways, more of an ideal: the healer, old wise-woman, and midwife.  A witch is someone who casts spells, practices divination, is proficient in herbal magic, amidst a variety of other magickal practices that are part of her repertoire.   A witch is steeped in earth-based shamanic methods in free-form, not tying her/himself to any particular creed, to any particular set of rules or regulations, group or clan. The witch tends to be a free spirit and often treads where others fear to go when it comes to practicing the occult.

“Wicca” is a religion which encompasses organized and ordered membership, regulations, and practices. It is also an earth-based nature religion which has grown to include a wide variety of paths, traditions, clans, and covens. Most Wiccans abide by the Wiccan Reed and seek membership that comes with required study and measured initiation.

I always knew that I was different and that I often perplexed people, though as a child I wasn’t sure how or why. The earliest memory I have of a "realization" probably came when I was about five years old, crouched alone on a terraced hillside. It was a hot summer day, though I was in a dark cool place, as the hillside was full of trees. I looked to my right, past the wire fence that separated the yard from pasture and watched a herd of cattle grazing in the hot sun, only a few feet away from my cool shadowed world. I reached to the low branch of a young locust tree, wrapped my fingers around a small green stem and gently slid the leaves off, into my palm. I stayed there for quite some time, crouched in my cool dark spot, closing my eyes to listen to the wind in the trees, believing that they were speaking to me.

I don’t remember what I did with the leaves, though I do remember that I wanted them for a reason.


It depends upon how you look at it. If, by a "code of honor", you mean that the witch must abide by someone else’s rules, someone else’s measurement of what is right or wrong, then I would have to say no.

The Witch, a real witch, moves in a landscape that is neither white nor black, but a landscape filled with shadows that are shades of gray,  To the witch, these shadows are not off limits. Balance is required in all things, including the practice of witchcraft; and once in a while boundaries have to be broken to maintain this balance.


I would describe Mojo as Magick, magick that incorporates natural elements to produce physical manifestation: herbs, stones, bones, personal items, bodily secretions, potions, powders, images, and symbols. Mojo also relies on intention and will, but not at the same level or intensity as Wiccan magick. With mojo, the magick resides in the molecules of the items used. The traditional voodoo priestess does not consecrate or empower her mojo bag.  She believes the power is already there.


Spells work by using the energy of our will and intentions, along with strong visualization, coupled with natural objects such as candles, fire, herbs, stones, photos, images, corresponding objects, etc., to produce physical manifestation into the real world. You must be able to see the objective of your spell as though it already exists. If you cannot visualize what you desire as though it already exists, you will not be able to manifest it into the physical realm.


I am an eclectic Witch.

There’s incredible knowledge and magick to be found on a number of occult paths. It’s like a magickal buffet of rich and varied practices that all work in different ways and on different levels. To me, it’s there for the taking, there for my use and my benefit. Spirituality and spiritual practices cannot be contained by the wishes and whims of man, but are spread throughout the universe, meant to touch each individual in a unique and very personal way.
We have to be open-minded enough not to be afraid to explore other religions, other forms of spirituality. Human beings have a terrible habit of pigeon-holing everything, thinking that everything must fit into specific boxes and that you can’t mix and match or you’ll mess things up.  And then there is the newest fad of "spiritual appropriation", an example of human beings trying to put restrictions on our spirit, on our souls, on our very personal journey of exploration to connect with the divine using resources provided by the Universe.
I practice many forms of witchcraft because Spirit calls to me in many different voices. 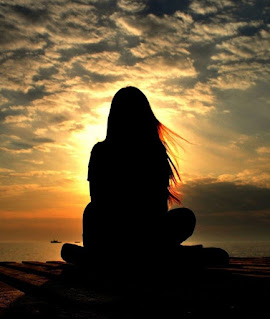 Posted by Amythyst Raine at 1:35 PM