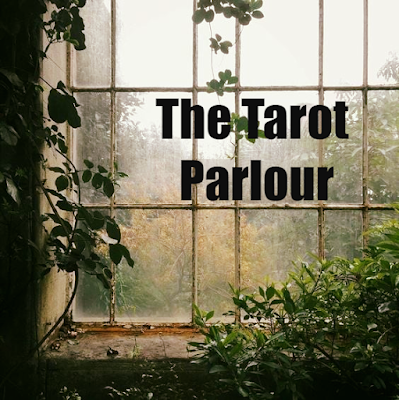 
Pentacles ~ It’s all about taking care of what you have. Its about learning to hang on to what’s yours and the idea of making things grow.

7/Pentacles ~ This card is all about taking care of what you have. This most often refers to money and material matters, but with the tarot, as we know, this can encompass so many other things. Sometimes this card comes up when someone needs to take action or make an important often time-sensitive decision and they’re dawdling, either caught in a moment of self-doubt and hesitation, or frozen with dread and fear.

The character on this card often tends to over-analyze. He’s hesitant to make any changes that might mess up the quo pro, even if those changes would be positive. (Isn’t it best to keep our garden as it is, without digging anything up, without planting anything new, without changing the scenery or the topography?… he surmises, leaning placidly on his hoe.)

Something imminent is on the horizon, which is going to shake up your world, rattle your coin purse, or empty your wallet. Your frozen objectivity about it all, your reluctance to make a decision, or act upon it, is not going to change this fact. Instead of feeling powerless and allowing yourself to be swept along on this wave, put your feet firmly down – you can feel the bottom, it’s there – stand up and stand up for yourself. Take control of your life.

All through my life I have vacillated between calm complacency or worried stress regarding money and finances. And for the majority of my adulthood, accompanied by this unnerving vacillation, I was married. I have realized in retrospection that the two times in my adulthood when I have been single, briefly in my 20s and now in my 60s, were the two times in my life I have been the most solid and stable financially. Not wealthy, mind you, but stable, comfortable, able to take care of things and then some… All By Myself.

My relationship with the seven of pentacles has been as unpredictable, difficult, and acidic as the relationships in my marriages, which never felt financially stable, no matter what the conditions, because I had absolutely No Control of the money or how it was spent.

The financial circumstances of my partners at the time did not alleviate the stress and worry, whether we were in a feast or famine mode. One husband’s late father’s estate was worth several million dollars, and my husband earned almost $100,000 a year all on his own by renting out his own prime farm ground. What did we live on at this time? The small amount of money he made working at a local retail shop (for health insurance reasons, he told me). That’s it. No money that was ever made on his farm property in Iowa touched our household in Nebraska; what it did do is knock my daughter out of financial assistance when she applied to college.

The other husband, as he himself admitted, “couldn’t keep a dime in his pocket”. The famine side of things was enormously stressful and worrying while we were together, the worst in my life, and fortunately this weird relationship and period of time was very short-lived. I kept thinking there has to be a balanced center here somewhere.

But now, at this time in life, at this age and stage, I’m fine. I’m free. And in this freedom I’ve made peace with the seven of pentacles. If you are having issues with this card, know that there is a way through it to a solid and acceptable solution.

Swords ~ It’s all about the thief and the very real prospect of losing something we value. It’s about being naive or vulnerable enough to find ourselves in the position of “victim”.

7/Swords ~ It’s all about stealth and deception, this card. I’m sitting here trying to think of a positive connection, but I’m at a loss. This card takes, takes, takes from you, just as some people you run across in life. And I always say to my tarot clients, so much so that it sounds clique to me, “Sometimes what’s stolen isn’t just material things, but intangible necessities like joy, self-confidence, trust, and love.”

The more life you live, and the more run-ins with this card you have, the more difficult it will be to remain optimistic, the harder it will be to trust people. You’ll find it difficult, if not impossible, to fall into friendships or love with wide-eyed breathless open anticipation. Caution will sit on your shoulder, shrouded in black, all morose and scowling, whispering doubts in your ear.

If you’ve brought this card up in reference to doubt about an individual or a situation, never fear, this card reversed is making a positive point. Carry on, with whatever it is, whomever it is, and move forward. Flick Caution, that irritating little bastard, off your shoulder with a flip of the wrist.

This card represents everyone who has ever stolen anything from me… the pink cheeked fuzzy lipped boy my sophomore year of high school – he stole the valiant idealism with which I viewed men. The snaky-eyed chattering woman who befriended me in my 40s – she stole my trust in other women and my sense of comfort in friendships. Some of the men I’ve been married to attempted to steal my self-confidence, a healthy self-ego, dreams, goals, joy, and laughter.

The seven of swords erupts with the dark realization that the immaterial ethereal things stolen from us are by far more devastating and destructive than any material object could ever be. Material objects are easily replaceable; but those things we can neither feel, touch, or see may be lost forever.

A pox upon the seven of swords, beware of his presence, cull him from your existence.

Wands ~ It’s all about knowing when you need to stand your ground and defend yourself, your position, your opinion, your loved ones, your home, or your reputation.

7/Wands ~ Stand your ground; draw the line; be on guard; hold your own… these are all phrases that come up for me with this card. And the appearance on this card in the traditional Rider/Waite gives us these messages, that poor figure using his wand in both hands as a weapon to hold off the torch bearing angry hoards. But this is just the surface, we barely see the picture; and we actually don’t even see the most important part of the picture… the angry hoards. We only see their wands.

Who are they? Why are they angry? Why must we be on the defensive with them? What will they do to us? What power do they hold over us? How can we regain dominion over them? How can we disarm them? Are they real, or are they only alive in our imagination?

When you’re able to answer any or all of these questions, you will have the full story for this card. If you don’t know the answers, or are unwilling to try and find them, you will forever be frozen in this battle stance.

Think of how much of your life has been spent being “Battle Ready”. And in retrospect, how many battles did you really have to fight, and how much time did you waste in this stance? It’s not our fault, not always, and not totally. It’s the world around us and its harshness, its brutality, its energy of hostility. This sounds so dark and pessimistic, I know, but the seven of wands carries this energy. It’s also a card of futile unnecessary fear. A wise lady once told me, a teacher she was at college, “99% of what you worry about will never transpire”. It’s true.

Be still all you merciless silly fears. Be gone all negative destructive energy. I banish the scary shadows on the walls of my life. I kick the nightmares and doubts from the dark recesses of my mind.

I raise my wand, not in a defensive mode, prepared to strike, but as a salute to the victory I now taste through all the challenges of this earthly life in this incarnation.

Cups ~ It’s all about reaching that point in your life that awaits a decision. It’s about living life fully, making sure you keep all your options open.

7/Cups ~ We may have wanted to have a variety of choices in our life; we may have wanted to reach a point where we could make the decisions and feel in control and heady with personal power; we may have reached a point where the world was knocking on our door, and all we had to do was choose our pot of gold, follow our chosen rainbow, and reap the rewards. But it’s almost never that easy (except maybe for a few golden magical individuals who seem to possess the key of fortune). For most of us, decisions come up and it turns out to be quite a quandary, often leaving us confused, perplexed, bewildered, and unsure.

When this happens, and you might feel sorry for yourself or wonder how you got in this predicament, left to make some monumental decision that might change the course of your life, remember this… there are a gazillion people out there who don’t have a choice. Be grateful that you do.

My life has always been impacted by my own decisions and choices, sometimes for the good, and often for the worst. How different everything in my life might be right now based on different decisions and choices that I could’ve taken. The thing is, in spite of difficult spots now and then, I wouldn’t change anything. If I were to change the tiniest most miniscule detail, I might be missing a child that’s part of my life. I might not have written a book. I might be on a completely different spiritual path. I might not be living in the unique and oddly skewered old house we’re so fond of. I might not be working where I am, connecting with a group of people important to me.

If I were to change any of these seven cups, the decisions I’ve made over the years, I might not be me. Make your life choices and decisions and don’t look back. Live your life with no regrets… Embrace the seven of cups and give it a good solid kiss right on the lips. 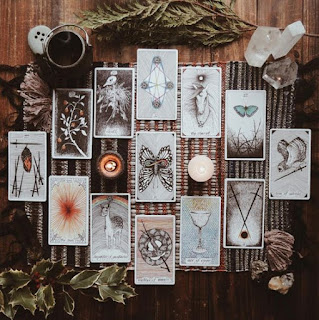 The contents of this post were taken from my book:
The Ultimate Tarot Guide: for Your Personal Tarot Journey 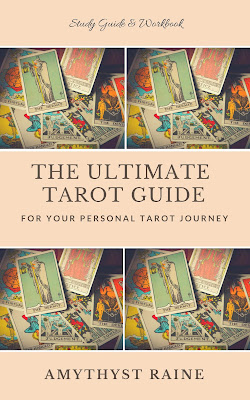