What If Your Spouse is Having an Emotional Affair? 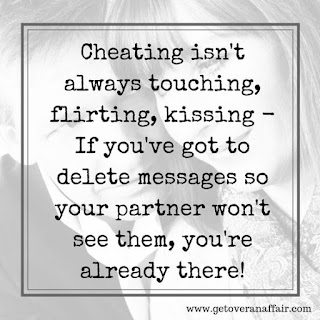 It usually starts out innocently enough. Your spouse has to get an important project done and needs help from a co-worker. It’s only natural that they would talk about their personal lives when they are spending so much time together. Or maybe your spouse is scrolling through social media one day and finds that a former lover sent him/her a “friend” request. So they start to talk “for old time’s sake.” That’s all it is, just talk. But you can’t stop that nagging feeling in the pit of your stomach that something’s off. Then one day, it hits you. Is your spouse having an emotional affair?

In the past, most people defined an affair as a sexual relationship between two people, at least one of whom was married to someone other than their affair partner. Most sexual affairs, but not all, have an emotional component to them as well. But just having feelings for someone else was never technically classified as “an affair.”
Now, that’s changed.
In today’s world, we expect that our spouse will not only be sexually exclusive with us, but s/he will be emotionally exclusive as well. We’re no longer okay if our spouse happens to fall in love with someone else, so long as s/he doesn’t have sex with that person.
An emotional affair then is an inappropriate emotional closeness with someone other than your spouse. That emotional connection in turn affects the level of intimacy, emotional distance, and the overall dynamic of your marriage.
In short, an emotional affair involves your heart, but not necessarily any other body part. To say that an emotional affair isn’t sexual, however, is not necessarily true.
According to world-renowned couples therapist, Esther Perel, infidelity contains one or more of these three elements:
Interestingly, this definition of infidelity does not require two people to actually have sex. Having a secret emotional relationship constitutes infidelity just as much as “hooking up” with someone outside of your marriage.
What’s more, an emotional affair can be just as hurtful, sometimes even more hurtful, than a full blown sexual affair. More than anything else, the secrecy of the emotional affair is what makes it so devastating. It’s also what makes it a betrayal.
The fact that your spouse may not have had sex with his/her new “friend” isn’t nearly as hurtful as the fact that s/he lied to you about his/her relationship.
What’s more, just because two people aren’t having sex, that doesn’t necessarily mean that their relationship isn’t exploding with sexual tension. As Esther Perel so aptly puts it in her ground-breaking book The State of Affairs: Rethinking Infidelity.

“Clearly, affairs can be sexual without a penis entering a vagina, and in such cases it is more helpful to call a spade a spade.”
Sometimes, the lack of physical contact is exactly what makes a relationship erotic.
Some relationships really do lack the sexual tension that characterizes a typical affair. People joke about having a “work wife” – someone they spend a lot of time with, but aren’t involved with romantically. Sometimes those relationships are truly platonic.
After all, just because you spend a lot of time working with someone doesn’t mean that you are having “A Relationship” with them.
What makes the difference between a working relationship and an affair is the lack of ANY of the three factors Esther Perel has identified as characterizing infidelity.
The spouse in the working relationship isn’t hiding any part of that relationship from his/her spouse. S/he is not sending furtive texts to their “work buddy” in the middle of the night. S/he is not sharing personal secrets and long-held dreams with their co-worker instead of with their spouse.
A truly platonic relationship also lacks the sexual tension that characterizes an affair. Neither person in the relationship is flirting with the other. Neither is making inappropriate remarks or sexually-charged suggestions to the other.
Finally, in a truly platonic relationship, the emotional connection that the people in that relationship share is typically minimal. Sure, they care about each other. But they care about you like a parent or a sibling. They don’t care like lovers care.
At its core, an affair – any kind of affair – is a betrayal of trust. When you discover that your spouse has been calling, texting, or spending time with someone else without your knowing about it, you feel violated. You feel like someone just hacked into your body with an ice pick and pulled your heart, and your guts, out right through your skin.
It feels that bad.
What makes that feeling even worse in emotional affairs is that the offending party might not even think they did anything wrong.
“I didn’t touch him/her! Why are you so mad? We’re just friends!”
Or, worse yet, the offending party may get mad at YOU for being “controlling,” “petty,” and “insecure!”
So, on top of dealing with your own emotional devastation, you — also have to deal with your cheating spouse’s anger, denial, and defensiveness as well. That makes recovering from an emotional affair pretty much impossible.
After all, if your spouse can’t even acknowledge your pain, s/he certainly can’t help you work through it. What’s more, if your spouse cares more about staying connected with someone else than s/he does about staying connected with you, your marriage isn’t likely to last very long. (Sorry!)

SOURCE
https://karencovy.com/cheating-spouse-having-emotional-affair/
Posted by Amythyst Raine at 9:53 AM